You are here: Home / Blog / Tinder Statistics in 2021: The Company, Fun Facts, Users and Finances 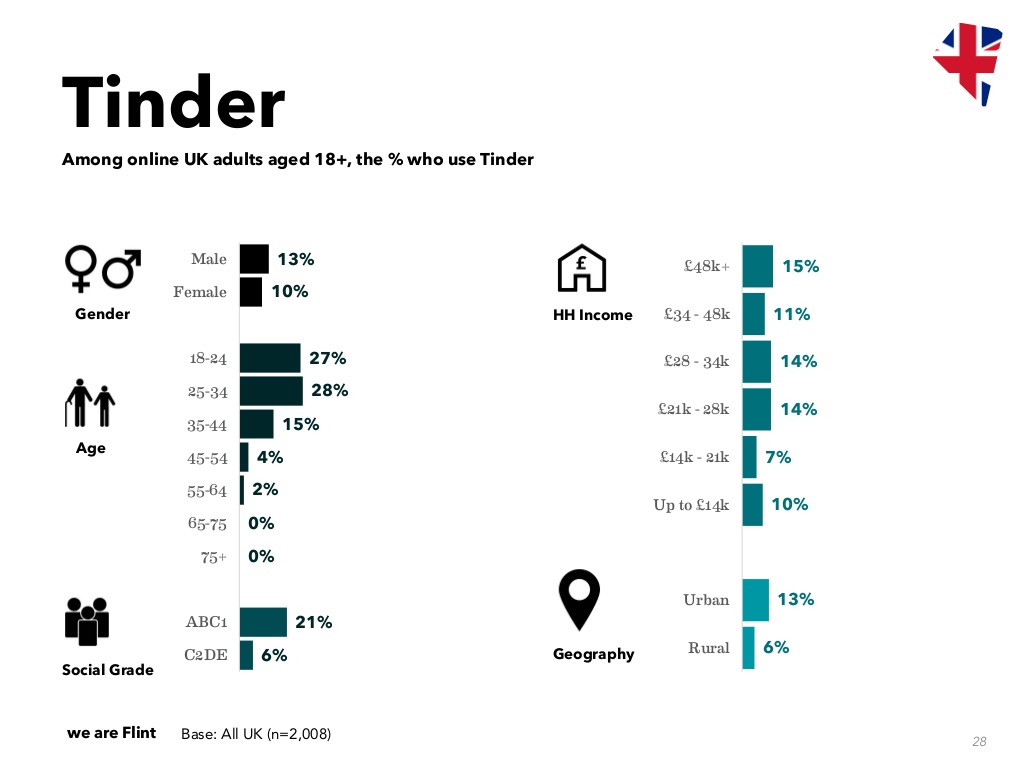 Is there a dating app with better statistics than Tinder?

Personally, I do not think so.

There are many online dating apps with good success stories but they just do not match to the level of Tinder.

Not by a long shot.

This is because ever since its inception in 2012, Tinder has continuously improved and become a major force to reckon with in online dating trends.

Need I go through how Tinder works? I do not think so when there are so many global users.

It is create an account (using phone or email), confirm a code and start swiping.

The Company Statistics for Tinder in 2021

Some Fun Facts about Tinder

It was through word of mouth that Tinder attained over 50 million users, mostly through speaking to college students.

There are over 10 million people using Tinder each day.

People are there to hookup, find friends, date or even get a long-term relationship.

Tinder is number 179 on Google Play’s most downloaded apps. Its usage has been falling gradually.

This is according to research by GlobalWebIndex.

GlobalWebIndex also continues to identify that; men are more than women in the ratio 2:1.

There are a total of 57 million people using Tinder. There are 10 million active daily Tinder users

These are mostly the generations of millennials and generation z.

2. Downloads on the App

There over 100 million downloads on Tinder. Most of these come from the Google Play Store.

Tinder is more likely to be used by criminals posing as potential matches to find people to harm, rob or rape.

The more the users on Tinder, the higher the risks in criminality.

There have been over 20 billion confirmed matches on Tinder.

This has increased the approval of online dating by 15 %.

There are 26 million daily matches made on Tinder.

The app proves easy to use and becomes addictive to the many users in it.

It is also not hard to get matches on Tinder.

5. How Many Want Meaningful Relationships?

Whether on paid or free service, the intentions of users do not vary much.

6. Daily Swipes to the Right or Left

There are 1.6 billion Tinder swipes made per day.

Free users get 50 swipes per 12 hours and premium users have the limitation removed for them.

72 % of Tinder users have preferred to identify as single according to the Moraa HPI.

54% are actually single and looking for all sorts of arrangements on Tinder, from long-term relationships to hookups to just friends

12 % are in a relationship already and just seek a hookup.

8. How many are in a Relationship?

This speaks a lot on Tinder being a site for cheating and not liking one’s current partner.

9. How Many are Divorced?

3 % of Tinder users are divorced.

There are many reasons for them to be on Tinder such as, to get quickies, catfish or just to find a new relationship.

10. How Many are Millennials?

There are as many millennials using Tinder.

The generation z closely follows. Most millennials are using it for hookups.

They do not think that flirting on dating apps is cheating.

11. How Many are Outside North America

The greater number of users are outside North America.

Tinder has proven that it can make it internationally.

12. How much Time does the Average User Spend on the App?

UK men who spend at least 36 minutes on Tinder on Thursdays closely follow them.

There are several reasons why users log in for that amount of time such as: procrastination to meet face to face, confidence build up and more.

Most people use Tinder between Thursday and Sunday.

Most users log in at 9pm. It is the best time to get matches.

13. How Many Weekly Dates are Created?

Tinder has made well over 1 million successful dates even though the outcomes are not known.

People have met face to face globally from Tinder a lot.

14. How Many College Students are on Tinder?

College students love Tinder a lot, even though they diversify over Badoo, OkCupid and Bumble.

15. How Many Countries Use Tinder?

There are 196 countries using Tinder.

Millennials are still the most that use Tinder, that is, ages 18-24. However, the generation z has been coming up pretty sharply to also be using the app a lot.

There are several reasons that may have led to Tinder losing its popularity such as, less serious interactions among matches and cat fishing.

The millennials are more active on Tinder than the other age groups. They are sharply followed by the generation z.

19. How many look after Their Appearance and Image?

85 % of Tinder users care about their appearance. They therefore use their best photos.

20. How Many Daily Swipes do Users Make?

The collective Tinder Users make 1.6 million swipes a day. This is at least 140-150 swipes per user looking at both the free and premium users. Obviously, premium users get to swipe more than free users.

21. What Sex Wears Neutral Colors the Most?

More men than women wear neutral colors in their photos.

Not looking brightcreates a challenge to men in finding matches as women like bright colors.

22. How Many Employees does Tinder have?

There are 200 active employees on Tinder though no one is really sure.

23. Does Tinder still allow Teens to use it?

24. How much do Male Users Swipe Right to Potential Matches compared to Female Users

Men swipe right to anyone as opposed to women who are very choosy.

Most women are cautious on picking matches than men who just swipe right.

35 % of men like most profiles on Tinder whereas women at 65% are very cautious.

25. How many Subscribers does Tinder have?

Today, Tinder has 5.9 million subscribers. This has been an increase from 4.1 million.

However, as Tinder is losing its popularity, most people may be idle in their accounts or found relationships and decided not to delete their accounts.

Users spend up to 35 to 45 minutes on Tinder. Average Tinder users log in 4-5 times a day.

Most college students are using Tinder to build confidence and for other unknown reasons. They are not so much into being laid as had earlier been believed. It is mostly about building esteem.

Tinder is easy to use and this is one of the reasons why it has seen a rise in the number of users. However, there are accounts that,either are not active because matches met someone or took a short break from the app.

There are 5.9 million people subscribed to using Tinder and these are well distributed into male, female, she-male, gay and lesbian and a small percentage of other.

More college students than any other people use Tinder and this is because it helps them build confidence.

They would like to know how to make conversation and what their matches are into before they ever meet.

Most Tinder users are yet to meet face to face due to several reasons such as, getting to know someone better.

There are more males than females on Tinder and this has increased in 2020 compared to 2019.

Dormant accounts have made the true usage of Tinder to show a different curve as compared to the number of subscribers.

In 2020, there has been an influx of generation z users and they are almost catching up with the millennial users. However, only users of 18 years and above can join Tinder and this may be the only reason why Tinder has more millennials than generation z. Had it not been the case, there would have been more generation z users.

The bloomers use Tinder the least and that number has dropped in 2020.

Most Tinder users come from the urban areas and this is easy to explain. It is because most urban dwellers are busy and work from home leaving less room for face-to-face interaction. They therefore take to Tinder for finding love, hook-ups, relationships or any other reasons.

In 2020, there has been an increase in male users and a decline in female users.

The gays and the lesbians alongside other sexes are not shy of their sexual preferences on Tinder.

One is likely to come across someone of a different sex in a chance of 1 is to 10 matches.

Tinder is the most open-minded app to a difference in sexes and does not discriminate against the users.

29. Tinder Percentage that are Married

A 12 % Tinder population is already in a relationship.

A 4 % of Tinder users have unknown statuses.

A 3 % of Tinder users are divorced or lost their partners somehow.

The married are on Tinder to cheat on their spouses, find a cheating spouse or just looking for a means to make the marriage interesting.

There is no one reason why married people are on Tinder and they keep on varying from one user to the next.

It is not always about cheating but also looking for trust in a partner.

The US and the UK have the most users on Tinder.

Brazil comes in at number 3 and it has been seeing an influx of Tinder users since 2017 with 10 million Brazilian internet users using Tinder.

These are also the most used countries as of 2020 in passport migration on Tinder.

People tend to look for matches in places where Tinder is used the most as they believe that their chances of finding matches are higher.

It safe to assume that not all US Tinder users are from the US but could be users with a passport making their location appear to be in the USA.

Tinder has been offering users free passport as of April 1st in the effort to make dating lighter online in the pandemic of the Covid-19.

It is not a surprise that even in 2020 most Tinder users are outside the USA. They are well spread out across Europe.

Most Tinder users try to meet up with their matches 2-7 days after matching.

Most are yet to develop the confidence to meet up.

20 billion matches have been made ever since Tinder was first launched.

Tinder users go on 1 million dates per week. This is out of the 5.9 million subscribers and 57 million users so there are still many that are yet to meet face to face.

1.6 billion people are making swipes on Tinder looking for matches.

Here, we shall look at how much Tinder earned in 2018 plus 2019 and then consider its total net worth in 2020 since the year is not yet over. This will be at least for the first quarter of the year.

Tinder’s revenue growth was at 19 % by the CAGR, which was considered slow.

It made a cool $ 1.15 billion in 2019. Match Group benefited a lot from these earnings as they were up to half of the total company revenue for 2019.

This was another big improvement from the 2018 earnings.

Tinder made its money from the several premium services that it has such as, Tinder Plus, Tinder Gold, Boosts and Super Likes and the consideration of one’s age and location.

That is, in order to buy Tinder Plus or Gold, users are charged by their location and age.

Even users who wish to remain free can purchase boost and super likes. One does not need a Gold nor a Plus subscription to get these.

Tinder is worth a whopping $10 billion US Dollars

Tinder is a force to reckon with in online dating.

However, Tinder has been slowly losing popularity as the 2020 facts reveal.

It could be due to its pricing and unfairness in terms of location and age.

May be people are not getting enough matches. There is Tinder for you.